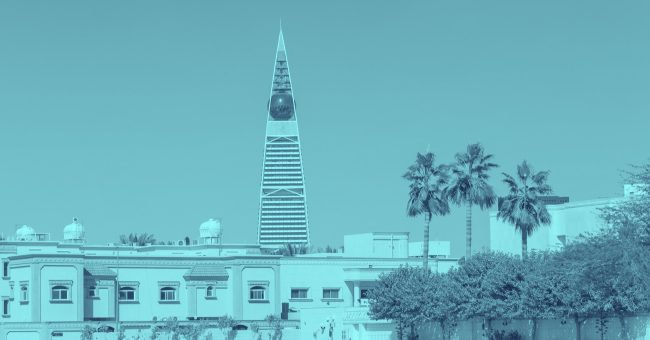 If a lack of speed or local expertise are among your top concerns when expanding to or employing workers in Saudi Arabia, an employer of record may be the best option for achieving your global growth objectives.

An employer of record, sometimes known as an international PEO, enables you to quickly hire and onboard workers in Saudi Arabia―often in as little as two weeks―without having to take on the cost and risk of establishing a local entity.

Learn about the hiring, employment, payroll and benefits requirements for workers in Saudi Arabia and how our employer of record service, Global Employment Outsourcing (GEO), and local HR experts can help you manage your international employment needs.

Employment in Saudi Arabia is regulated by the Labor Law and the Social Insurance Law as well as provisions of Shari’a, or Islamic law.

Vision 2030, a strategic plan aimed at restructuring and revitalizing the economy, looks to increase the number of Saudis who are employed in the private sector and the number of women in the workforce.

Penalties for labor law violations range from 100,000 riyals to closing down the business.

Since employment in Saudi Arabia is highly regulated, it is essential that all employment practices and contracts are compliant. As your employer of record and PEO in Saudi Arabia, we can ensure that every contract, for every worker, meets all requirements. We can also provide you with guidance about cultural norms and hiring best practices and keep you up-to-date with employment regulations as they change.

As you look to hire employees in Saudi Arabia, here are some common regulations you’ll need to know to create a compliant contract, as well as how an employer of record and PEO can provide support for your unique HR need.

Working hours
Normal work hours are eight per day with a maximum of 48 per week spread across six days. Employees may work overtime as long as the workday does not exceed 12 hours.

During the month of Ramadan, Muslim employees can work a maximum of six hours per day or 36 per week.

Friday and Saturday constitute the weekend, with Friday being the weekly paid rest day. Employers may replace this with another day of the week as long as they notify the government. Payment may not be provided in lieu of a rest day.

In remote areas and in jobs that require continuous operation, weekly rest periods may be consolidated for up to eight weeks as long as the employer and employee agree, and the Ministry of Labor approves.

Employees may not work more than five consecutive hours without a break, with the exception of certain positions including management, guards and janitors, or work that is intermittent.

As your employer of record in Saudi Arabia, we can provide you with resources and insights about employee compensation, so you are better equipped to make a competitive employment offer.

Bonuses
Bonuses are not required, but it is customary to give a 13th-month bonus on Eid al-Fitr.

During the probationary period, the contract can be terminated without notice by either party, unless the contract gives that right to only one of them.

Termination and severance
An employment contract may be terminated if both parties agree, with agreement in writing from the employee, because of force majeure, or for a valid reason with written notification at least 60 days prior to the termination date.

If either employer or employee terminates a contract without the required notice, they must compensate the other wages for the duration of the notice period or the balance of the contract.

An employee who resigns is entitled to one-third of their end-of-service award after two to five years of employment or two-thirds of the award for service between five and 10 years.

An employer may terminate without notice if the employee does any of the following:

Employers must give employees the opportunity to challenge their termination.

If an employee is terminated without a valid reason and severance is not specified in the contract, the employee is entitled to 15 days’ wages for each year of employment (with an open-ended contract) or all remaining wages (with a fixed-term contract). In either case, the minimum amount of compensation may not be less than two months’ wages.

When employment ends the employer is required to give a certificate of work experience with dates of employment, occupation and the last wage received. The employer may include information that might limit future employment choices as long as they provide their reasoning.

Employees who have been terminated and are working during their notice periods are entitled to eight paid hours or one day a week to look for a new job.

Employees may resign without notice if the employer does any of the following:

As your employer of record in Saudi Arabia, we can work with you to quickly handle the unforeseen event of an employee termination, providing legal guidance and a personalized process that ensures you stay out of labor court.

When negotiating terms of an employment contract with a candidate in Saudi Arabia, here are some of the statutory benefits and paid leave requirements to keep in mind, as well as how an employer of record can support your company’s benefits strategy.

An employer may not terminate anyone who is on maternity leave, or for the duration of any illness that results from pregnancy or delivery for up to 180 days afterward.

Vacation
Employees are entitled to 21 days of paid leave a year. After five consecutive years with the same employer, this increases to 30 days per year.

Employers may determine the dates of their employees’ leave but must notify them of the dates at least 30 days in advance. With the employer’s permission, annual leave may be postponed until the next year.

After at least two consecutive years of work, employees are entitled to 10 to 15 days of paid leave to perform Hajj, a pilgrimage to Mecca, including the Eid Al-Adha holiday. This paid leave only has to be given once during employment with the same organization, and only if the employee has not performed Hajj before. The employer may determine how many employees receive this leave annually.

Holidays
Employees are entitled to nine paid holidays a year:

If National Day falls on a weekend, a day off is given on a day before or after the weekend.

Work on public holidays is paid at 150% of regular wages.

Sick leave
Employees are entitled to 30 days of sick leave at full pay each year, an additional 60 days at 75% pay and another 30 days that are unpaid. The year is counted starting from the first day of sick leave.

An employer cannot terminate an employee because of illness until they have exhausted all of their sick leave. Employees can request their sick leave to be combined with annual leave.

Health coverage
Most healthcare in Saudi Arabia is provided via public coverage, which is governed by the Ministry of Health and funded by the government. It is free for Saudi citizens and expats working in the public sector.

Employers of private companies must provide health insurance for their employees. These plans typically cover only the basics, and many employees take out additional private insurance.

As part of Vision 2030, healthcare is being digitized and further privatized.

As your employer of record in Saudi Arabia, we may be able to provide optional supplementary medical insurance coverage for professionals and their dependents at a more cost-effective rate.

Pensions are based on 2.5% of the insured’s average monthly earnings for the last two years for every year of contributions. The minimum pension amount is 1,984 riyals per month.

Workers’ compensation
If an employee is injured at work, the employer is required to cover all related costs, as well as any that result from a relapse or complication. In the case of a temporary disability, the employee is entitled to full wages for 30 days, then 75% of their wages for the duration of treatment.

After one year, or if it is determined that the employee’s chances of recovery are improbable or that they can no longer work, the injury is considered a total disability and the employee must be compensated for the injury. Compensation is equal to three years of pay, with a minimum of 54,000 riyals.

Employers are not required to pay compensation or cover treatment costs when:

Employer social costs will cover a large portion of employee benefits in Saudi Arabia, but we can consult with you about supplemental coverage options, such as additional pension contributions or life insurance, if needed.

Employee onboarding with an employer of record in Saudi Arabia

We write and validate all local employment contracts, streamlining the onboarding process for you and your Saudi Arabia employees—all you have to do is provide relevant information and review and approve the employment agreement.

As your employer of record in Saudi Arabia, we will:

We’ve seen just about every global employment circumstance imaginable—and with our extensive knowledge of local law and culture, we know what it takes to get employment right in Saudi Arabia. We provide written contracts in the local language, salaries in the local currency and HR support in your employees’ time zone.

Let’s talk about your employment needs in Saudi Arabia

Ready to employ in Saudi Arabia?